New Delhi | Karnataka Medical College Corona : Once again the increasing cases of corona in the country are increasing the trouble. In such a situation, the possibility of a third wave coming once again seems to be increasing. SDM in Karnataka across the country The case of the College of Medical Sciences had scared people badly. Now once again big news has come from here. It has been told that the number of students infected with the corona virus of the hospital increased to 182 on Friday. The higher information has been given by the officials of the Ministry of Health today. 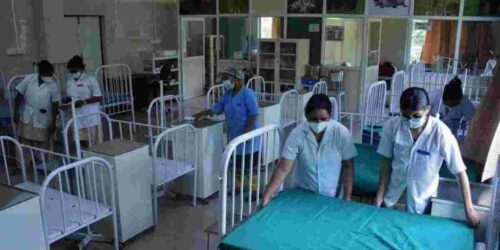 Have taken both doses of corona vaccine

Karnataka Medical College Corona : Let us inform that on Thursday, it was informed that 66 students studying medicine have been found infected after the examination of three hundred students out of 400 students. Students found infected with Kovid-19 have taken both doses of corona vaccine and are residents of other states. All of them are MBBS first year students. After the district health officials confirmed that these students were infected with the corona virus, the district administration has declared two hostels as containment zones as a precautionary measure.

Karnataka Medical College Corona : Taking the security and situation seriously, all the infected students have been isolated and quarantined in the hostel. The administration suspects that these students have been infected with this deadly virus during a program organized by the first year students in the college and hospital premises. In this regard, Deputy Commissioner Nitesh Patil said that the students participating in the program have been asked to get the corona test done. At present, students are being screened and offline classes have been suspended.