Mumbai | Due to the rapidly spreading Omicron variant in the country, there is a steady increase in corona cases. Now India’s voice nightingale Lata Mangeshkar has been found to be Corona positive. After which he has been admitted to the hospital. 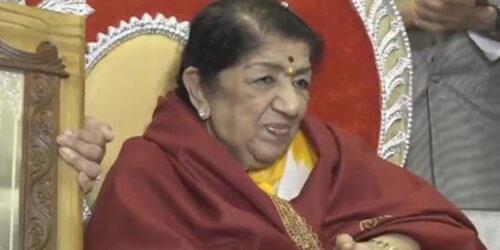 Read:- Corona spreading rapidly in Uttarakhand, ban on bathing in the Ganges in Haridwar on Makar Sankranti, all schools in the state closed

pneumonia caused by covid
Lata Mangeshkar Hospitalized: It has been revealed in the information that Lata didi has got pneumonia due to Kovid, which is being called as Kovid pneumonia. After which the condition of Lata Mangeshkar has also not been told well. Lata didi was admitted to Breach Candy Hospital on Saturday night. Lata Mangeshkar, who has lent her voice to Bollywood, has given her voice in many films.

Legendary singer Lata Mangeshkar admitted to ICU after testing positive for Covid-19. She has mild symptoms: Her niece Rachna confirms to ANI

Also read:- Good News! This vaccine of Pfizer will beat Omicron, will be available in March, Omicron figure reached 4461 in the country

niece confirmed to be infected
Lata Mangeshkar, who has lent her voice to Bollywood, has given her voice in many films. His niece Rachna has confirmed that he is a Kovid victim, saying that he has minor symptoms of corona and has been admitted to the hospital.

“She is doing fine; has been kept in ICU only for precautionary reasons considering her age. Please respect our privacy and keep Didi in your prayers,” singer Lata Mangeshkar’s niece Rachna to ANI

Nutan's granddaughter Pranutan breaks the limits of boldness, will be blown away after seeing this picture