After the Calcutta High Court gave a green signal to the organizing of the Ganga Sagar Mela, it began on Wednesday with strict COVID-19 protocols. West Bengal Chief Minister Mamata Banerjee inaugurated the Ganga Sagar Mela held annually at Gangasagar in West Bengal. Speaking to ANI, South 24 Parganas District Magistrate Dr P Ulaganathan said that the Ganga Sagar Mela has been organized as compared to those organized during the COVID-19 pandemic. Gangasagar Fair is the biggest fair in the eastern part of India. Every year lakhs of devotees and sadhus come here. But this time due to Kovid-19, all our preparations have become complicated and a lot of extra preparations have to be done. We have made elaborate arrangements for COVID management at all entry points. We are conducting medical screening at every entry point and have made various arrangements ranging from thermal checking to sanitisation. We are also conducting rapid antigen testing of pilgrims and sadhus. Coming to the fair. ( Inauguration of Ganga Sagar Fair) 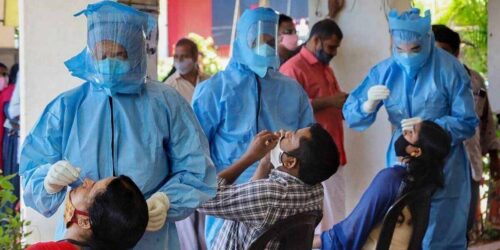 The District Magistrate further said that water ambulances and air ambulances are also available for Kovid infected people. He said that random testing is being done to know whether people are infected or not. He said that we have deployed doctors, police and volunteers on a large scale. We were able to manage everyone who came here. He further said that all the activities of the Mela are being monitored from the Mega Control Room. CCTV cameras and drones are being used to keep a watch on every movement of the fair. CCTV cameras, drones have been installed, an integrated control room has been set up but police, civil defence, civil administration can all see them. Monitoring is also being done from the state secretariat Nabanna. Senior officers IG, DG are being closely monitored. and at the Chief Secretary level. The Chief Minister came here and left after doing a complete review. And constant review meetings are also being held in the headquarters. This time we have prepared very well.

cross the sea to come to the fair

The District Magistrate said that a large number of police, navy personnel, disaster management teams, civil defense forces have been deployed to keep an eye on the crowd management, as well as to facilitate the movement of people through buses, ships and GPRS facilities. Arrangement has been made. He said that more than 15,000 police personnel are deployed here. Also, there is civil defence, navy and army are also deployed because the area is so huge. Everything has been done for safety and security. He said that boats, ships and all arrangements have been made for transportation as one has to cross the sea to come to this fair. Has been. The order of the High Court is being complied with. Whether people have been double vaccinated or not, it is constantly being investigated. RT-PCR test is being done, no one can come to the island without vaccination and RT-PCR test.

Mask distribution is also being done and so far five lakh masks have been distributed. He said that now many people are afraid to go into the water and some people are not able to come, so we have arranged heavy drones for Gangasagar bath, everyone will be bathed in the Ganges by drone. It will start from tomorrow. The District Magistrate said that this time also Ganga Aarti has been organized in a grand manner. The event will be organized through e-darshan platform on various social media platforms like YouTube, website, Facebook, Twitter and will be telecast live on Instagram. We are seeing whether people are following all the covid protocols or not. Our team is around the fair from land to sea. Held during winters, this fair is an annual gathering of pilgrims who perform several rituals, lamp lighting and chanting in and around Sagardweep. (Inauguration of Ganga Sagar Fair)

Kapil Sharma's wife called Kapil poor in a packed gathering, then something like this happened

Share memories related to the pallu of mother's saree with Anupam Kher, know what the actor said in the video