Rajasthan Cabinet Cast Jaipur , After the first reshuffle of the cabinet in Rajasthan after three years, former Deputy Chief Minister Sachin Pilot is more discussed than Chief Minister Ashok Gehlot. Departments have also been divided in the Gehlot government. 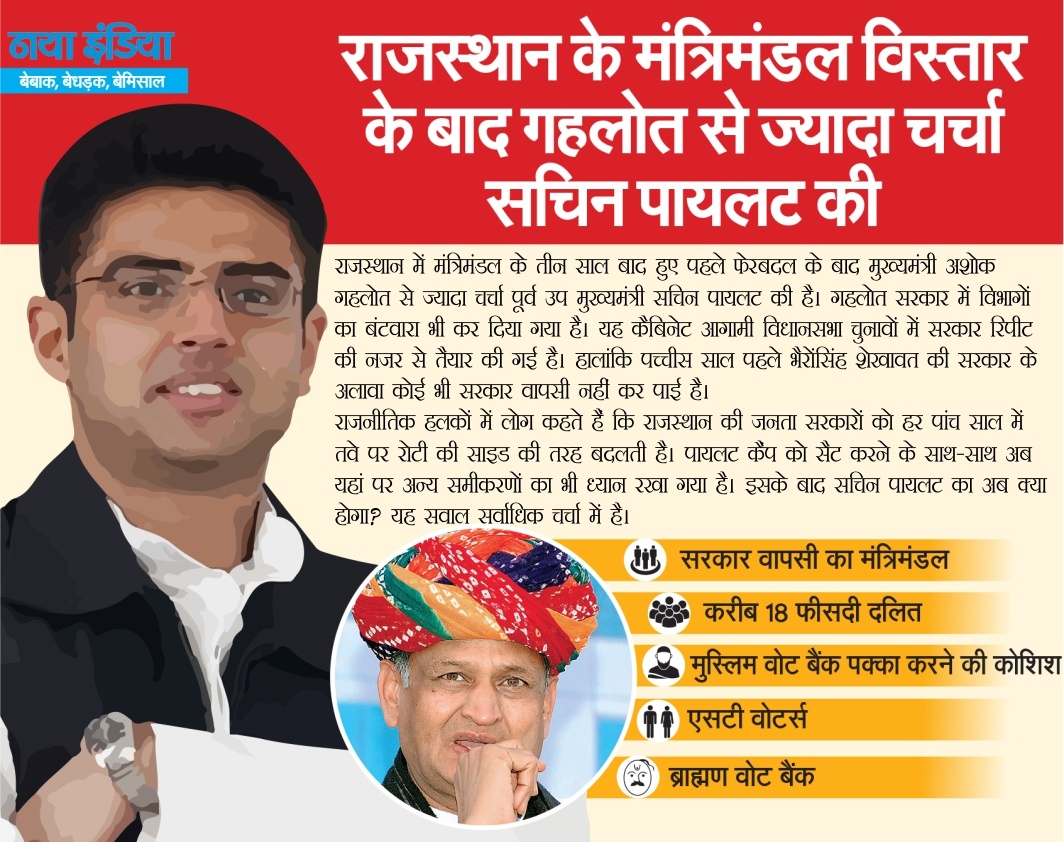 This entire cabinet has been prepared with a view to getting the government to repeat itself in the 2023 assembly elections. However, except for the government of Bhairon Singh Shekhawat in 1993 in Rajasthan, no party has been able to make a comeback till date.

People in political circles say that the people of Rajasthan change governments every five years like a side of roti on a pan. Along with setting up the pilot camp, other equations have also been taken care of here. What will happen to Sachin Pilot after this? This question is also the most discussed.

It is to be known that for the last one and a half years, Pilot was angry with the neglect of his supporters and workers. When he tried to revolt, he was sacked from the post of deputy chief minister and state president. 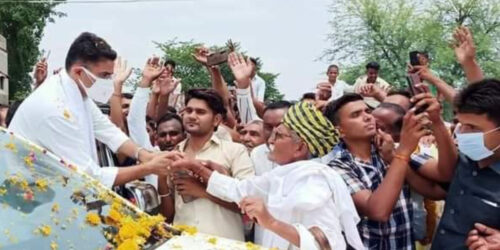 CM Gehlot even rejected him and called him useless. When the tension increased, the Gandhi family intervened and kept the pilot in their camp.

If seen, this cabinet has been prepared with the aim of repeating the government in the 2023 elections. This has been tried at other points along with initial attempts at reconciliation between the Hum Gehlot-pilot faction.

For example, about 36 percent of the total population in Rajasthan is Muslim, Dalit and Adivasi. In this reorganization, special care has been taken that these people who are the basic vote bank of Congress. He vehemently joined the party.

Rajasthan Cabinet Cast About 18% Dalit
There are 18 percent Dalit voters in Rajasthan. Gehlot has given place to 4 Dalit ministers Govindram Meghwal, Tikaram Julie, Mamta Bhupesh and Bharosilal Jatav in his cabinet. Subhash Garg is already the Minister of State with independent charge. Jatav has been elevated in stature by giving Sachin Pilot the Public Works Department, Tikaram Julie the Social Welfare Department and Mamta Bhupesh with women and child development without the status of planning. Along with administrative reform coordination, relief and disaster management, statistics and planning department, Govindram has also been given due importance in the government. The portfolios of Minister of State Subhash Garg have also been increased. Out of these, three have independent charge of Technical Education, Ayurveda and Public Problem Redressal Department. While in five he has been made minister of state. This is the first time that a total of five ministers have been made giving such a high status to Dalits. It is clear that the Congress wants to retain its original vote bank.

Trying to ensure Muslim vote bank
About nine and a half percent of the voters are Muslims. 9 MLAs are presently in Rajasthan. There was only one minister for three years. He too had only a minority portfolio. In such a situation, by making another minister of state, the Gehlot government has tried to connect Muslims firmly with them. A Muslim MLA, Danish Abrar, has also been given the status of a minister by making him an advisor to the CM. Another Muslim MLA, Wajib Ali, may be made parliamentary secretary. The department of less importance from Saleh Mohammad has been strengthened by giving him important responsibility of minorities affairs, waqf, land revenue and agriculture irrigated area by taking public problems disposal. However, Zahida has got less important departments in independent charge, which are Printing and IT. But as a minister of state, he has been given an opportunity to work in important departments like education, art, literature, culture, archeology.

Rajasthan Cabinet Cast ST Voters
The number of ST voters is also huge in the state. It is about eight and a half percent. There are now three cabinet ministers from the tribe as Mahendrajitsinh Malviya, Parsadilal Meena and Ramesh Meena. There are two ministers of state in the form of Arjun Singh Bamania and Murarilal Meena. While increasing the stature of Parsadilal Meena in the division of departments, he has been given the important responsibility of excise along with medical and health department. Mahendrajit Singh Malviya has given major departments of Water Resources, Indira Gandhi Nazar Project and Ground Water Planning. Not only this, Ramesh Meena has been entrusted with the important department of Panchayat Raj and Rural Development. Arjun Singh has come to Bamnia with independent charge of tribal area development and as Minister of State for Public Health Engineering Department and Ground Water Department.
Murarilal Meena has been given independent charge of general administration, agricultural marketing. While the Minister of State for Tourism and Civil Aviation has been made. MLA Ramkesh Meena has been made advisor to the CM. In such a situation, Gehlot government has also tried to hold on to this vote bank by giving effective option to the tribe.

brahmin vote bank
Earlier BD Kalla and Raghu Sharma represented this caste on important departments in the government. Now Mahesh Joshi has been given this place in place of Raghu Sharma. However, Joshi already held the post of Chief Whip with the rank of a cabinet minister. CP Joshi is already the Speaker of the Assembly. Rajkumar Sharma, who was a minister in the past, has been made an advisor. Mahesh Joshi has been given a big budget department like water supply and ground water department. BD Kalla has been given the departments of Education, Art, Culture, Archeology and Literature.

trying to pacify the gujjars
Gujjar community is also a big factor in terms of vote bank. Sachin Pilot comes from this society. To make Pilot the CM, the Gujjars had voted heavily for the Congress. Now this society is very angry at the marginalization of Pilot. Pilot was first made deputy chief minister, but was later removed. At present there was no Gujjar MLA in the cabinet, now Shakuntala Rawat has been given a place. Efforts have been made to bridge this gap by giving a big department like industry to Mrs. Shakuntala. Along with this, state bodies and temples have also been handed over to them. Among the ministers of state is Ashok Chandna. who once belonged to the pilot group. Now he is on Gehlot’s side. Gehlot had also unsuccessfully tried to make him the face of Gujjar society. However, Gehlot, increasing the stature of Chandna, has also made her a minister of state for four departments, including DIPR. As a soft Gujjar leader, Dr. Jitendra Singh has been made an advisor to the Chief Minister, while he was a cabinet minister in the previous government.

Rajasthan Cabinet Cast: Importance of Gudha-Bhati in Rajputs
Gehlot has made Rajendra Singh Gudha a minister of state while increasing the representation of Rajput society. Although his brother-in-law Bhanwar Singh Bhati is already a minister of state. Pratap Singh Khachariyawas of this society once belonged to the Pilot faction, but he changed his side during the rebellion. In such a situation, Gehlot has now taken the Department of Transport and Sainik Welfare and has given a less important department like Food and Consumers by cutting them. Taking military welfare from them, Rajendra Gudha has been given independent charge. Gudha has also been given independent charge of Home Guard and Civil Defense and has been made Minister of Rural Development and Panchayat Raj. Gudha came from BSP and had brought other MLAs along with him, for which he has got the reward. While increasing the stature of his brother-in-law Bhanwar Singh Bhati, Gehlot has given independent charge of the Energy Department. Along with Water Resources, Indira Gandhi Nazar Project and Water Resources Planning Department have also been given.

Rajasthan Cabinet Cast
Jat community is very important in terms of vote bank in Rajasthan. The state presidents of both the parties are Jat. Now the most influential six ministers in the Gehlot government are from this category. In such a situation, giving important departments like Udayalal Anjana to Co-Operative, Lalchand Kataria to Agriculture, Ramlal Jat to Revenue, Vishvendra Singh to Tourism and Hemaram Choudhary to Forest and Environment. On the other hand, Brijendra Singh Ola has been given a big department like transport as a minister of state.

After all this math is set, it is clear that all the management has been done keeping in mind the 2023 assembly elections. At the same time, according to Sachin Pilot, his priority was to get the MLAs and supporting leaders of his camp in the power-organisation. With no position being given to Pilot here, it is clear that he will be given a post in the organization in the next few days.

Must Read : Rajsthan: Before the expansion of the cabinet, Pilot said – there is no faction in Rajasthan Congress…

Now it is being said that Pilot can be made in-charge of any state by making him the national general secretary. But it does not seem that the pilots will leave Rajasthan. Will he be the CM face in the 2023 assembly elections? This question is the biggest, but this restructuring has happened, it is clear that the pilot has been given priority.

Pilot made it clear in his own press conference two days ago that in this cabinet reorganization, Priyanka Gandhi has gone and her supporters have been taken care of. The pilot himself has said that he is ready for the responsibility the high command will give.

After this statement it is clear that along with making Pilot a star campaigner in the electoral states, he will also be given the responsibility of in-charge of any state. What will that responsibility be and how will it be fruitful, so that they can also be effective in the 2023 Rajasthan elections. All this will be decided in the future.

Infographics : Know the new ministers in Rajasthan, who reached the cabinet

Delhi: The girl was given a new scooty by the family, but due to SEX…

You too are searching for Parag Agrwal’s salary, so read the report…

Sitting on JCB, this couple wanted to do Grand Entry in marriage, but then something happened that will not stop your laughter…

KBC Controversy: After the controversy over the episode increased, KBC apologized, said – there will be no mistake from now on….