The Supreme Court has given liberty to the petitioner to approach the local authorities to stop the Dharma Sansad to be held in Aligarh on January 23. The Supreme Court heard on Wednesday the petition of former Patna High Court judge Justice Anjana Prakash and journalist Kurban Ali. The petition has sought a direction to a Special Investigation Team (SIT) to conduct an independent, credible and impartial inquiry into incidents of hate speeches against the Muslim community. 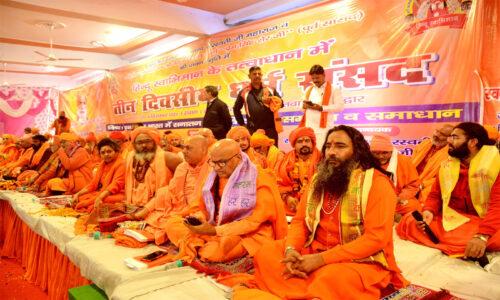 Read also A flurry of resignations took place in the Yogi government! Now the minister in the government, Dara Singh Chauhan, submitted his resignation letter to the governor.

It is noteworthy that in the Dharma Sansad held in Haridwar, Uttarakhand, Hindu sadhus and other leaders had called for taking up arms against Muslims and their alleged genocide. Hearing the petition, Chief Justice NV Ramana said- We do not want to say anything in this matter right now. We will issue a notice to the state government and seek its response.

Earlier, on behalf of the petitioner, Kapil Sibal said- I do not want to sensationalise the matter. Read the court transcript. Notice should also be sent to the Center in this matter so that the matter can be heard soon because Dharma Sansad is being organized again in Aligarh on 23 January. Advocate Indira Jaising, appearing for Tushar Gandhi, said that he too has filed an intervention petition.