New Delhi: Do you have Permanent Account Number or PAN Card? If yes, then you should now link your PAN card with Aadhar card by March 31, 2022. If you fail to link the two most important official documents in India by March 31, you may have to pay a fine. But not only that, not linking the PAN card with your Aadhar card will also result in a dormant PAN from April 1, 2022. ( pan card update ) 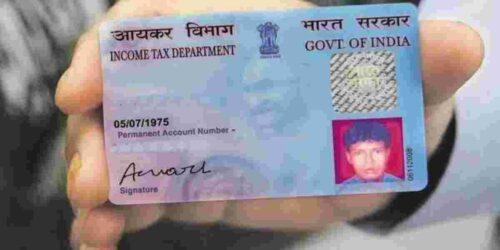 also read: Madam’s call came to CM Channi, said – action should be taken against the responsible…

The deadline for linking PAN card with Aadhar card has been extended by the Income Tax Department not once, not twice but four times. The first deadline set by the department was May 31, 2021, which was extended till August 31, 2021. From the end of August, the deadline was moved to November 31, and then to December 21, 2021. Finally, the Income Tax Department has set the last date for linking Aadhar Card with PAN Card is 31st March 2022. The Central Government has made it mandatory for every eligible PAN cardholder to link Aadhaar with Aadhaar as per section 139AA of the Income Tax Act with effect from July 1, 2017. Failure to link both the documents may result in penal action.

The Central Board of Direct Taxes (CBDT) had earlier notified Rule 114AAA which laid down the manner and consequences of deactivation of PAN. As per the rules, if a cardholder’s PAN becomes inoperative, he shall be deemed to have not furnished, informed or quoted PAN, as the case may be, and shall not be liable for all consequences under the Act. Furnishing, informing or quoting PAN. However, the individual can later reactivate his/her PAN by intimating his/her Aadhaar to the department. In addition, as per Section 272B of the Income Tax Act, a person may face a fine of up to Rs 10,000 each time he fails to submit his operative PAN card to avail services that require official documents. ( pan card update )

Even on the 13th death anniversary, the wife of film judge Balwant Singh Bansal is looking for help from 'Sinta'