New Delhi: The Punjab Police on Thursday, December 2, recovered one tiffin bomb, four grenades from the village of Gurdaspur. This is the third such recovery in three consecutive days. RDX, two grenades were recovered from the border district earlier. After busting two Pakistan-ISI sponsored terror modules in Gurdaspur this week, Punjab Police on Thursday, December 2, recovered four grenades and another part of a tiffin bomb hidden in a sack recovered from the border village of Salempur Araiyan. DGP Punjab said that in view of the recent recovery of RDX, grenades and pistols from the border district, strong static and shifting nakas have been set up by all the SHOs under the supervision of gazetted officers. ( Tiffin bombs recovered) 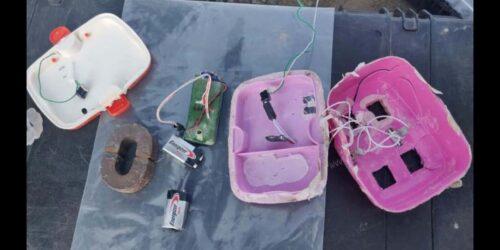 also read: Most Searched PM Modi in Yahoo Search Engine in 2021, Mamta Didi is not far behind here too…

He said that during checking at T-point near village Salempur Araiyan, SHO Sadar Gurdaspur found a suspicious sack in the roadside bushes and on checking the sack found four grenades and a tiffin bomb hidden in it. Bomb Detection and Disposal Teams (BDDS) teams have been informed to disperse the explosive material. The DGP said that on the instructions of Deputy Chief Minister Sukhjinder Singh Randhawa, the Punjab Police, especially the Border District Police Force, are already on high alert and the Border Police is conducting daily night duty domination operations. Several ADGP rank officers are deputed to personally oversee the night supremacy operations in the border districts.

Earlier on Wednesday, 1 December, Gurdaspur police had recovered 0.9 kg RDX on the disclosure of Sukhwinder Singh alias Sonu, a resident of Lopoke, Amritsar, who was arrested on Sunday (28 November), while on Tuesday (30 November) the district police two handed. Grenades were recovered. During this, FIR number 154 dated 02/12/2021 has been registered under sections 3, 4 and 5 of the Explosive Substances Act at Police Sadar Gurdaspur (Tiffin bombs recovered)

Most Searched PM Modi in Yahoo Search Engine in 2021, Mamta Didi is not far behind here too...

Elon Musk sold Tesla shares worth 10 billion dollars, will he remain the richest person in the world ..