Kashipur | Uttarakhand News: In the security lapse during the visit of Prime Minister Narendra Modi to Punjab, where there is a ruckus in the country. On the other hand, a similar security breach has also come to the fore in Kashipur. In which a person broke into the security of Congress veteran and former Uttarakhand CM Harish Rawat. After which the Congress has called this administration a big mistake.

knife on stage
Uttarakhand News: Actually, Harish Rawat, the head of a campaign committee, had come to the Congress membership campaign as the chief guest. During this, as soon as former CM Harish Rawat got off the stage after his address, a person suddenly climbed onto the stage and started shouting slogans of Jai Shri Ram from the mike. In such a situation, other workers, including the Congress Assembly Speaker, turned off the mike protesting against it. After which the person took out a big knife and started threatening to kill him. 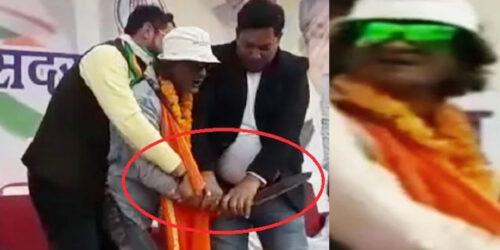 workers caught hold
When the matter became serious in the meeting, Youth Congress Assembly Speaker Prabhat Jha and the workers caught hold of the person and controlled him. This incident once created panic among the workers and the people present there. However, the situation was handled. Photos of this incident are also going viral. According to ANI, the police of Udham Singh Nagar has arrested this person and he has been interrogated.

Uttarakhand | A case registered against a man for allegedly brandishing a knife during an event organized by the Congress party in Udham Singh Nagar. Former CM Harish Rawat was also present at the event: Udham Singh Nagar Senior Superintendent of Police (SSP) Dilip Singh Kunwar

What is keeping Aditya Roy Kapur super busy in 2022?

The shooting of Prem Singh's film 'Ek Deewana 12 Haseena' is going on in full swing in Lucknow.