The assembly elections of five states are being described as the semi-finals of 2024 and at the same time it is also being called semi-finals for the Congress. but it’s not like that. The semi-finals will be held next year, when assembly elections will be held for half a dozen states from South to North and East to West. By law, this election is not even a quarter-final for the Congress, but it is a qualifier. Its results will decide whether Congress will go to play in the next rounds or not. Therefore, whatever be the case, this time the Congress will have to perform well in the elections of five states.

The election qualifiers for the Congress in five states are because the party will not be able to stay in its present form if the Congress does not perform well. Till now the leaders of the Congress party are leaving or the party is broken in Meghalaya of Northeast. But the party’s poor performance in these five states will lead to a huge division. The leaders who were writing letters to the Congress President till now are all sitting on the margins and watching the spectacle. As soon as the Congress loses, all will fall on the leadership. Wouldn’t be surprised if there would be a split of the 1969 type. At that time it was Indira Gandhi, she had charisma, which made her Congress stand after that partition. But this time if such a division happens, then the Congress of those who will be different will become the real Congress. 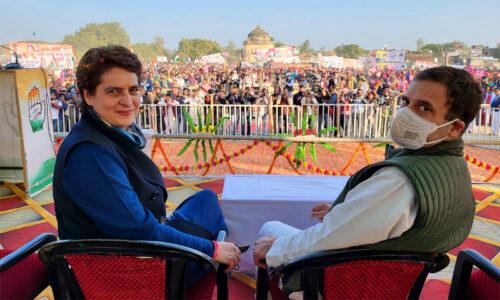 This will happen because big leaders who have left the Congress are planning it and successful election strategist Prashant Kishor is supporting them. Satraps like Mamata Banerjee and Sharad Pawar are waiting for the defeat of the Congress. The old leaders with him who are still in the Congress are in touch with him. From Ghulam Nabi Azad to Anand Sharma, Kapil Sibal and Bhupinder Singh Hooda, many leaders are sitting ready. Prashant Kishor has already given the theory that unlike other regional parties, the Congress does not belong to any one leader, but the Gandhi family is the custodian of this party. On the other hand, the central government and the ruling party have the goal of creating a separate Congress-mukt Bharat.

The good thing for the Congress is that out of the five states where elections are being held this time, it can win elections in the remaining four states except Uttar Pradesh. This will not happen because of the Congress’s own politics, but because of the situation in these states and the internal strife of the BJP, these four states are showing favorable conditions for the Congress. Considering it as a qualifier, Congress fights it in a do or die style, only then there will be a possibility that it will be able to play the next round or not.

Regional Amateur: Guaraní won in Corrientes and will seek to seal his pass to the semifinals in Posadas - MisionesOnline