New Delhi | CM Yogi Election UP: Since the announcement of the assembly elections, there was a constant discussion about where CM Yogi is going to contest. Now it has been made clear that Yogi will neither contest from Ayodhya nor Mathura. It has been made clear by the Bharatiya Janata Party that now Yogi Adityanath will contest from Gorakhpur city seat as a BJP candidate. Along with this, it has also become clear that the state’s Deputy Chief Minister Keshav Prasad Maurya will also contest from Sirathu. 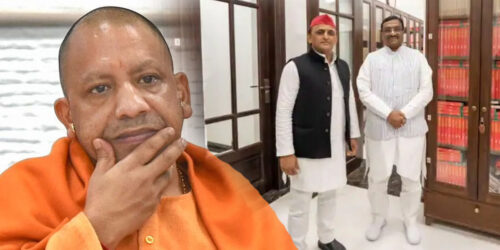 CM Yogi Election UP: Addressing a press conference in this regard, BJP’s election in-charge and Union Minister Dharmendra Pradhan announced the names of candidates for the first and second phase seats. He told that the party has decided to field Legislative Council members and popular leaders Yogi and Maurya in the election field. In this first list of BJP candidates, state cabinet minister Shrikant Sharma from Mathura, former governor and BJP vice president Baby Rani Maurya from Agra Rural, Pankaj Sharma, son of Defense Minister Rajnath Singh from Noida, senior leader Suresh Khanna from Shahjahanpur and music from Sardhana. Prominent names like Som are included.

Also read- BSP supremo Mayawati released the list of 53 candidates, said- I will not contest elections

63 MLAs get tickets again, 21 new faces get a chance

CM Yogi Election UP: The BJP has announced the names of its candidates for 105 seats in view of the elections to be held in 113 seats under the first and second phases. These names were stamped by PM Modi, BJP President Jagat Prakash Nadda, Union Home Minister Amit Shah, Defense Minister Shri Singh and Union Minister Nitin Gadkari and other members of the party’s Central Election Committee in a meeting held on January 13. The BJP has given tickets to 63 MLAs out of its 83 sitting MLAs, while the tickets of 20 MLAs have been cut. In this list, 10 women have been given tickets and 21 new faces have been given a chance.