Dehradun | Top sources said that CM Pushkar Singh Dhami may announce the abolition of Devasthanam Board in Uttarakhand. A day after Uttarakhand Agriculture Minister Subodh Uniyal’s official residence was gheraoed on Tuesday, a group of Chardham priests took the step. Assembly elections are to be held in Uttarakhand in the coming year. For which all the parties are working hard. ( devsthanam board dismis ) 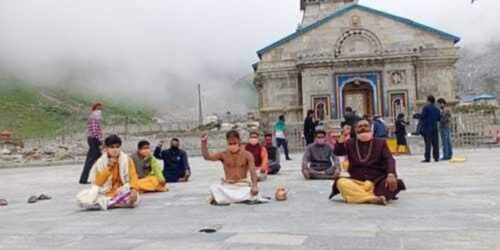 Temples will be taken out of control of the Board

The priests of Chardham, Kedarnath, Badrinath, Gangotri and Yamunotri have been demanding the dissolution of the Devasthanam Board for a long time. which they see as an encroachment on their rights. The board was constituted during the Chief Ministership of Trivendra Singh Rawat and is mandated to run the affairs of 51 temples in Uttarakhand including Char Dham. However, soon after taking over, former chief minister Tirath Singh Rawat announced during the Kumbh that the temples would be taken out of the board’s control. But he had to step down before he could speak.

Chief Minister Pushkar Singh Dhami had constituted a high powered committee to look into the issue and find a solution acceptable to all stakeholders. However, all the four Dhams have been closed for the winter season. When the Char Dhams were open, the priests there were demanding the cancellation of the Devasthanam Board. When asked to the priests, they say that this disturbs our rights. Trivendra Singh Rawat has been demanding from the government till now Dhami government to dissolve the Devasthanam board. CM Dhami says that he will dissolve the Devasthanam Board. ( devsthanam board dismis )

“ESI is our task”, the self-assisted course with assessment that is available on the Guacurarí Platform

International trade: a career with a future that offers four job opportunities