There is now almost a month left for the Punjab elections. Political parties make their own strategy, Engaged in campaigning and wooing voters. But there is a discussion going on in most of the people and political parties that whether the Aam Aadmi Party will repeat the performance of Delhi in Punjab., If we assess on the basis of circumstances and facts, then there is a solid possibility of this thing. In fact, the Delhi Assembly elections have been a political laboratory for the Aam Aadmi Party, from where the party learned the winning formula and tested that formula by repeating it for the second time in a row in Delhi. It remains to be seen whether the conditions and preparations for Aam Aadmi Party like Delhi are in Punjab also.,

In the 2017 assembly elections in Punjab, there was a tremendous craze in the Malwa region for the Aam Aadmi Party, but it could not convert it into votes to that extent. Also, the party was very weak in the other two areas, Doaba and Majha. This time all the surveys are indicating that the Aam Aadmi Party has made its inroads in all the three areas of Punjab. Bhagwant Mann comes from Malwa region and at present Aam Aadmi Party is contesting elections in Punjab under his leadership. Kunwar Vijay Pratap Singh, who was a senior police officer of Punjab, is claiming to wave the flag of Aam Aadmi Party in Majha. Kunwar Vijay Pratap, who headed the investigation team into the 2015 sacrilege case, came into limelight when he questioned the suspected role of former chief minister and veteran Akali leader Parkash Singh Badal in his report in the case. Singh’s image has been that of a strong police officer and he is very popular among the people.

There are many similarities between the massive victory of the Aam Aadmi Party in Delhi in 2015 and the situation in Punjab today. For example, at that time the main competition in Delhi was with the BJP and there were internal conflicts in the BJP regarding the CM candidate. Today, the main contest of the Aam Aadmi Party in Punjab is with the Congress and Sidhu’s displeasure over the way Charanjit Singh Channi was made the Chief Minister after Captain Amarinder Singh quit the party is no secret. 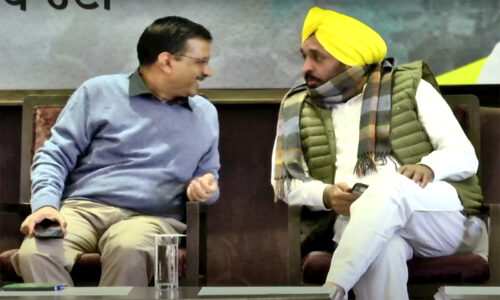 Even if we look at the election preparations and campaigning, the Aam Aadmi Party seems to be in the same strong position as Delhi. Aam Aadmi Party used to decide the issues and agenda of elections in Delhi too., The same is visible in Punjab as well. Kejriwal says that he will give one thousand months to women, then Siddu first makes fun of that promise of Aam Aadmi Party and then himself announces to give two thousand rupees a month. When Kejriwal talked about waiving the electricity bill, Channi also announced to reduce the cost of electricity in a hurry. Aam Aadmi Party has raised the issue of sand mafia or schools, In Punjab elections, all the parties start talking on the same issues. Be it the distribution of tickets in Delhi or the promises of manifesto, the Aam Aadmi Party was the first to take decisions with confidence.

In Punjab too, the Aam Aadmi Party has announced candidates for almost all the seats, while the Congress has not announced a single candidate yet. The Congress may have tried to reduce the anti-incumbency by removing the Captain, but all the election surveys are currently showing the Aam Aadmi Party’s upper hand. The leaders of the Akali Dal, a longtime BJP ally, revealed how the last time the RSS and the BJP had turned the game on occasion by getting the votes of their supporters transferred to help the Captain.

Due to the farmers’ movement, this time it has become a condition that BJP or RSS have no supporters left in Punjab to transfer votes. That is, there does not seem to be any major reversal due to vote transfer. And it should also be kept in mind that against the local faces of the opposition parties, all this increase and the atmosphere is currently only on the basis of Kejriwal and the issues, in which the Chief Minister’s face is yet to be announced.

What did India get?

There should be a ban on leaving the job and contesting elections directly.