Lucknow | Swami Prasad Maurya Resign: As soon as the dates of the assembly elections 2022 were announced, there has been a political upheaval in Uttar Pradesh. The defection has started in the BJP which is considered to be the strongest party till date. Swami Prasad Maurya, who was the Labor Minister in the UP government, has resigned from the party on Tuesday. After his move, 3 more MLAs have distanced themselves from the party. 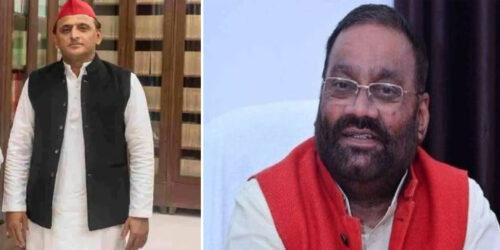 These three MLAs also resigned from the party
Swami Prasad Maurya Resign: Among these three MLAs, who gave a jolt to the BJP before the elections, Brajesh Prajapati, MLA from Banda’s Tindwari, Bhagwati Singh Sagar from Bilhaur and Roshan Lal Verma, MLA from Tilhar Assembly, have brought a political storm by resigning. It is believed that after separating from the BJP, these MLAs can join the SP.

Also read:- UP Election: Meeting held in the presence of Shah and Yogi, BJP veterans sitting to make election strategy…

I am a political person, so I have to talk to some political party. Whom we will talk to, we will decide after talking to our workers, supporters: Swami Prasad Maurya on the question of joining Samajwadi Party pic.twitter.com/bQsuJJWSdA

UP Election: Now what is this... Yogi government's MLAs started a wave of resignation, till now...