New Delhi. On Thursday, the number of corona virus patients found across the country has crossed the one lakh mark. After seven months, more than one lakh patients have been found in the country within 24 hours. Earlier on June 6, 2021, one lakh 636 patients were found. On January 1, the first day of the new year, 27,553 new cases were found and in just five days its number has quadrupled. Till the writing of the news on Thursday, about one lakh eight thousand new patients were found in the whole country. By late night, this number may increase further as the figures of many states were not updated till the time of writing the news.

The speed of corona infection in the capital Delhi has almost tripled in three days. On January 4, 5,481 cases were found in Delhi and on Thursday, January 6, 15,097 cases were found. On Thursday, six infected people died in Delhi. A day earlier on Wednesday, eight people had died. Earlier, in the entire month of December, only nine people had died due to corona infection in Delhi. The infection rate in Delhi has increased to 15.34 percent. 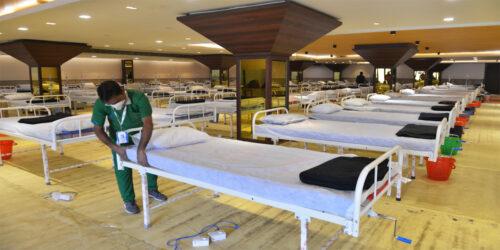 Due to the rapidly increasing cases of corona virus, the annual Vibrant Gujarat conference in Gujarat has been postponed. Many more state governments have canceled their already scheduled programs. After the Congress, the Aam Aadmi Party has also canceled its election rallies. Anyway, AAP’s national convener and Delhi Chief Minister Arvind Kejriwal is corona infected and is in isolation.

However, the Vibrant Gujarat Summit to be held in Gujarat from January 10 to 12 has been postponed. Prime Minister Narendra Modi was to inaugurate this summit. In Gujarat, a minister and five IAS officers have also been found corona infected and the number of new cases has gone up to four thousand. On the other hand, in view of the increasing cases of corona, the Chhattisgarh government has banned the cleanliness rally and other public programs to be held in Raipur on January 8 till further orders.