Lucknow. Congress General Secretary Priyanka Gandhi has made every effort to make the Congress party stand on its feet after visiting the districts in the last two years. In this sequence, through the slogan ‘I am a girl, I can fight’, Priyanka Gandhi also played the stake of cultivating half the population i.e. women. And in this assembly election, by announcing 40 percent women tickets, the politics of UP heated up. But now Priyanka Gandhi, who talks about giving tickets to 40 percent women in UP, will contest elections in UP? This question is now being asked to him only. Priyanka Gandhi has also been asked questions on this issue many times, but Priyanka Gandhi is giving round-the-clock answers on her own contesting elections in UP. Not making any clear announcement. Whereas now the election has been announced. In such a situation, it is now being discussed that Congress’s ‘girl, can fight’ campaign is for others? And Priyanka Gandhi has distanced herself from her slogan of ‘Ladki hoon, lad sakte hoon’, now Congress will enter the election field without any big face.

At present, no big leader is ready to speak anything to the Congress in this matter. Congress state president Ajay Kumar alias Lallu, senior Congress leader Pramod Tiwari or Priyanka Gandhi’s PA Sandeep Singh, falls silent on the question asked about Priyanka Gandhi contesting elections in UP. Whereas these leaders know that every political party in UP has a big face in UP. The Bharatiya Janata Party (BJP) is contesting the election on the face of Chief Minister Yogi Adityanath. SP Akhilesh Yadav, BSP Mayawati and RLD are in the election field on the face of Jayant Chaudhary, but Congress is losing in this matter. Although everyone is aware that Priyanka Gandhi has made the slogan ‘Ladki hoon, fight sakti hoon’ the basis of Congress’s election campaign. 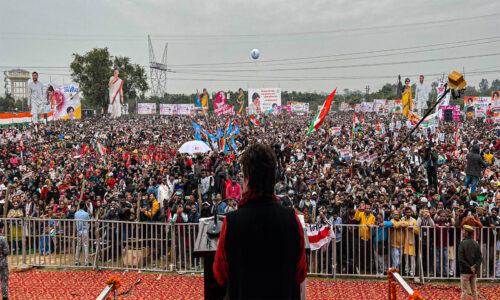 Perhaps Priyanka Gandhi is also aware of the discussions about the Congress among the public. Priyanka Gandhi, who is playing the role of troubleshooter for Congress, wants to see Congress as a strong party, which has been in exile for more than three decades, but for this she herself is not able to dare to contest from UP. This is the reason why whenever Priyanka Gandhi is asked this question whether she will enter the electoral battle of UP assembly elections 2022? So, every time the same answer is received from their side that it will be decided by the top leadership of Congress. Girish Pandey says that this answer of Priyanka causes doubt. When top leadership in Congress means Gandhi family only, then who can stop Priyanka Gandhi from contesting elections? It seems that Priyanka Gandhi wants to avoid the stain of poor performance of Congress in the 2022 UP elections with the help of this answer. Because, Congress does not seem to be convinced from anywhere about its performance in the UP elections.

What did India get?