Kanpur | Ind vs NZ Test : In the first test match played between India and New Zealand, Gutkha Man, who became the man of the match on the first day, has been found. The name of this person who eats gutkha in chic is Shobhit Pandey. Sitting in the stadium in his native Kanpuriya style, this person, who ate gutkha, came to watch the stadium match on the second day as well. Talked to Shobhit Pandey in the stadium itself. Shobhit Pandey looked very angry during the conversation. He said that no one wants to be famous in such a way that people know me for this reason. He said that I had not done any mistake and I was not eating gutkha, but I had betel nut in my mouth. He said that the cameraman deliberately tried to show that I was eating gutkha sitting there. 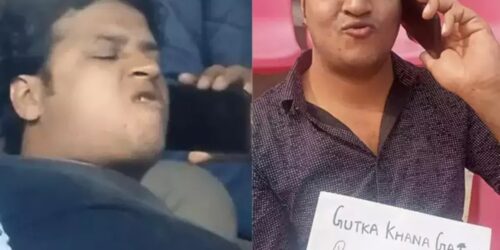 Didn’t have girlfriend together sister

Ind vs NZ Test : Businessman Shobhit says that sitting with him is not his UP girlfriend but his sister. Shobhit says that many indecent comments were also made on the internet, which I do not like at all. He says that people are no longer trolling needlessly and it has become difficult to get out on the road. Annoyed, he said that wrong things are being said about my sister too, how can anyone tolerate this.

will come every day to watch the match

Ind vs NZ Test : Shobhit says that he is very fond of cricket. That is why on the first day also he had come to see the match with his sister. He said that the purpose of coming today was only so that I can present my truth in front of the world. However, Shobhit says that he does not care about all these things, he is a fan of cricket and will definitely come to support the team. Let us tell you that yesterday, a picture of Shobhit came in the camera in which he is showing desi chic and running his face in which it seems that he is eating gutkha.